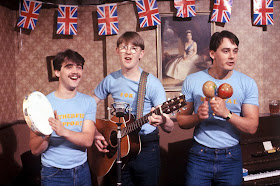 One of the things I’ve enjoyed most about watching Classic Corrie on ITV3 is getting to know the young Curly Watts.

Curly was different to other characters on the street. He read Dostoevsky and he quoted Yeats. He bought the Economist and he thought about things. I mean, look, here he is with a mullet staring wistfully from behind Emily Bishop’s curtains: 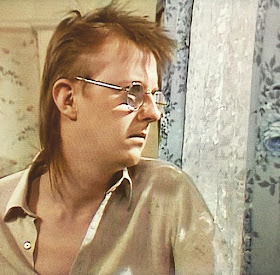 And here he is pondering the human condition in the Rovers before concluding: “relatively, a micro-second of happiness is all we can expect in this tidal wave of human misery”: 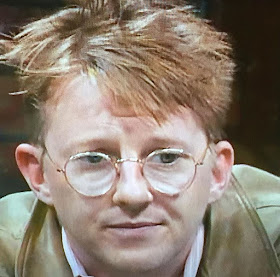 With an outlook as cheery as that, Curly must have been a fan of The Smiths, which would have been bizarre because Kevin Kennedy (actual real name: Kevin Williams) was in The Paris Valentinos - the first band formed by The Smiths’ Johnny Marr. 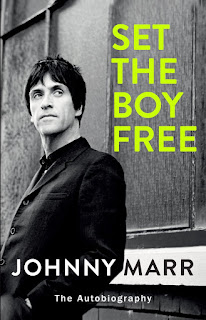 I recently read Marr’s autobiography and he recalls his time as a teenager jamming with the future Curly Watts: “Lanky and sporting nerdy spectacles, he didn’t quite fit the image of the rock star, but it didn’t bother him one bit as he was a natural showman who gallivanted around the neighbourhood, entertaining everyone with songs and jokes he’d memorised from television and things he had come up with himself. Kevin and I went through some songs from a Beatles book… and I saw that he was good, so I started looking for a place for us to practice while coming up with some songs that we could all play.” 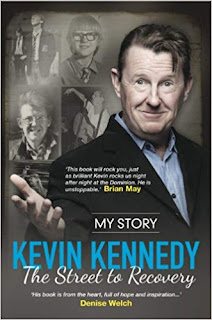 I have also read Kevin Kennedy’s memoir and he remembers turning up at Johnny Marr’s house with his guitar: “I sat on his bed ready to play some tunes with him, while he plugged in his Strat and he started playing. I was amazed - I didn’t think anyone of our age could play like that. Even then, I just knew that this guy was going to be something special and that I was privileged to be the first person ever to play with Johnny like that… I thought that this guy was something else, and not only that, a thoroughly nice bloke.” I’ve met Johnny and I can confirm that he is still absolutely lovely!

Kevin goes on to say: “that jam session changed things, even more so when Johnny suggested we form a band… he also came up with a name for us, The Paris Valentinos.” For Kevin though, “it wasn’t so much of a band as a social thing; we only really played one gig, which was a Jubilee street party, and we’d only practiced about three songs: we played ‘Anything That’s Rock ‘n’ Roll’ by Tom Petty, Rory Gallagher’s ‘Shadowplay’, and a very slow version of ‘Don’t Believe A Word’ by Thin Lizzy… we played that gig, and then got drunk because we could sneak some cider, and that was really the point of the day for us. We didn’t play much more after that.” Johnny has a similar recollection, although he also remembers ‘Jumpin’ Jack Flash’, Tom Petty’s ‘American Girl’ and a “confused” version of ‘Maggie May’, summarising that “it was a good day. We went home feeling triumphant and drunk. I knew we were scrappy and I felt like a kid, but at least I was a kid in a band.”

The Paris Valentinos soon fizzled out and before The Smiths, Johnny would join Sister Ray and form White Dice. He says that “Kev didn’t mind not joining as he was getting into acting and would eventually join the cast of Coronation Street.” 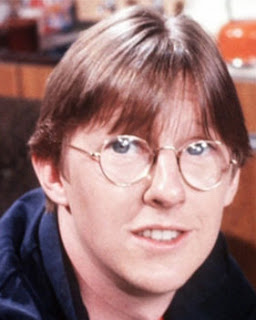 Curly Watts first appeared on 11 July 1983. In early 1984, Kevin Kennedy performed in ‘Hamlet’ in Sheffield and tells how “one evening, Johnny Marr was playing with his band – The Smiths were now very big news – at the local university, and I went over to see him after we’d finished… he was pleased to see me and we discussed what we were both doing, it was nice for me to be able to say I was on TV regularly and in Hamlet down the road.” What a night out that would have been!  The Smiths gig would have been Sheffield Uni on 31 January 1984. It was a cracking setlist, viewable here.

Kevin Kennedy may have turned to acting but that didn't stop him from living a rock ‘n’ roll lifestyle. His book details the alcoholism that crept up on him until one day in 1998 when Corrie packed him off to rehab. He’s not touched a drop since.

When he left rehab, Kevin decided to give music another go. He was signed by Simon Cowell who was looking to capitalise on the chart success he had achieved with the actors Robson Green and Jerome Flynn. Kevin recalls meeting with Cowell: “What experience did I have of the music industry… had I ever been in a band before? Well, I said that when I was young I was in an early incarnation of The Smiths. It’s not often when you see people lost for words. After a brief discussion, he said those magic words: ‘Right, let’s do it.’ I signed with BMG.” 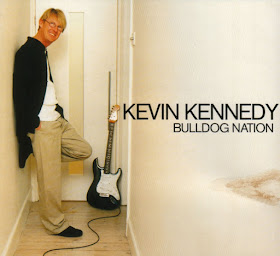 The single ‘Bulldog Nation’ was released in June 2000. It didn’t do as well as Robson and Jerome but it did go gold in New Zealand. I think it’s a BRILLIANT song and if you’ve never heard it… then here it is:

In my view, ‘Bulldog Nation’ deserves an immediate re-release. However, I’d rather see Curly Watts make a long overdue return to Coronation Street. It’s been 15 years since Curly left Weatherfield and Kevin Kennedy has made no secret of his desire to go back to Corrie. Perhaps the new producer will be the one to make that call. Stranger things have happened… did you know that Curly Watts was almost in The Smiths?