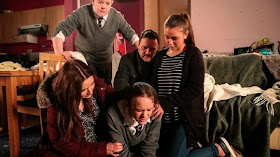 Poor Faye. Despite labour having begun she refuses to let Craig contact Anna because she fears rejection. But as the pain worsens, she changes her mind, and a relieved Craig is dispatched to get her Mum. Sophie, hearing noises upstairs, finds Faye, which is a lovely touch, as I learned just yesterday from the episode’s writer Jonathan Harvey that the two actresses are actually cousins.

As a shocked Anna and Owen arrive to find a very distressed Faye, Sophie’s lone tear speaks volumes as the young mother-to-be cries out “I’m sorry” and begs her Mum not to send her back. She is naturally reassured that will never happen by a seemingly calm Anna, but the panic and helplessness on the part of everyone involved is clear and conveyed brilliantly by all concerned.

Craig has been a consistently great friend to Faye throughout. His advice, words of support, preparation and research do him immense credit, and while he is on the receiving end of angry words from Anna, Owen and Tim, his smile is delightful as Faye cries out from the ambulance “Craig! Thanks.” Beth assures him she’ll stand by him regardless as she presses him for information, and when Kirk tells him “I’m your Dad, if that’s alright with you” I wondered if these episodes could get any better. It’s great to see that such a strong support network exists for Craig when others doubt him, especially considering that’s what he offered Faye. 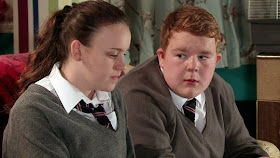 I’m a sucker for complexity, and Craig swearing on his pet rat Darryl's life that he is not the father of the baby is a line which is more than the sum of its parts. These simple yet brilliant words by Julie Jones convey the fact that he too is a child, tell us how much his pet means to him, and show that the strength of his devotion is such that his mother can be assured he’s telling the truth.

Stunned Tim learns the news from Owen, and while I love that he consistently tries to get away with playing the fool, his beautiful words as he sat by his daughter’s side were emotive and affecting as he tells her, “You’ll always be my little baby girl”. Despite the sad circumstances, he is clearly proud to announce “I’m a granddad”. Anna is less excited as she berates herself for not noticing and wonders why Faye couldn't tell her. She’s not the only one struggling, as Faye turns away when presented with her newborn baby girl.

It’s true that there was a degree of reticence on the part of viewers when this story was announced, but it has proven that it’s not the plot that matters, but rather how it is executed. As far as I’m concerned, it has been an absolute triumph, and actors Ellie Leach and Colson Smith have a lot to be proud of, as do all involved in the storyline.

Carla is back, and so is her mystical fireplace. Basking in both its glory, and her own, having secured a contract with the rather unpleasant Mr. Hanlon, she is joined by Nick and a bottle of red wine. I’m dubious about a potential partnership here, and while their dialogue was natural and engaging, I feel it might be best for them to remain friends. After the success of the Faye and Craig storyline though, I’m open to being pleasantly surprised.

Other things I enjoyed about these brilliant episodes included Bethany telling Jason about Sarah's Italian shrine to him and asking "Is Callum gonna be my new Daddy?" and Sean's performance. He was more of a compére in tonight’s episodes than he was at the butler auction, and it’s a part that really suits him. He sashayed through each scene with quips aplenty, and for me, this is Sean at his best. Tracy flashing a frustrated Tony made me laugh for some reason, and I enjoyed the general banter in the Rovers and the sibling friction between David and Sarah.

My last word, however, is reserved for the strawberry in the Moët & Chandon; or perhaps I should say the orange in the Bucks Fizz. 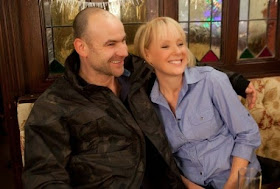 There are some things in this life that give boundless pleasure and no one moreso on the cobbles at present than Sally Webster. Shall I compare thee to a summer's day Sally? Thou art more lovely and more temperate than Pam Ayres shopping in the Arndale Centre in a “nasty tracksuit”. Ah yes, Sally’s realist slant on the poetic is like Tim’s chippy tea to the steak tartare she mourns throughout both episodes. And yet the self styled “high flyer” keeps her head high, shouldering unnecessary guilt for "abandoning" Carla in her hour of need, having offered her unwanted services at the “high powered business meeting” and “pow wow” taking place with Mr. Hanlon at the Bistro.

She resigns herself to white wine in the Rovers with Tim, Anna and Owen where she despairs at the standards in Freshco’s, espouses the merits of recycling, private schooling, lingerie modelling and how her life has turned out, and it’s brilliant. What I love about Sally is that she’s far more at home in the Rovers lording it over her inferiors, than attempting to pronounce Cordon Bleu in the Bistro, and she knows it. When all comes to all, Tim’s suggestion of pie in a tin after promising she’d be wined and dined has her giggling. He is the icing on the cake, and while they joyously play the parts of snob and fool, they meet one another somewhere in the middle where their genuine love and affection is the glue that holds them at the centre. I hope they never part.

On a final note, there is so much to be positive about when these exceptional episodes are considered, and long may it continue.

All original work on the Coronation Street Blog is covered by a Creative Commons License
Emma Hynes at 17:58
Share