Too many nights in the ’açienda? 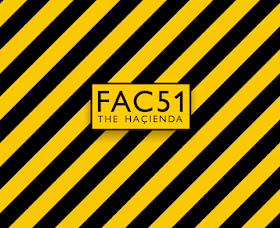 I’m off work today and posting this blog as I embark on an exciting mission to Manchester (more on this in due course). Hopefully, it won’t be a Blue Monday!

It was fun on Friday night as we went back to the 80s for Beth and Kirk’s wedding. The highlight for me was this exchange between Tim and Norris as the bridal party stepped out of Number 5:

Tim: Takes you back does it Nozzer?
Norris: Oh the decades all blur into one for me if I’m honest.
Tim: Oh is that right Nozzer? The 80s were a blur, were they? Too many nights in the ’açienda? 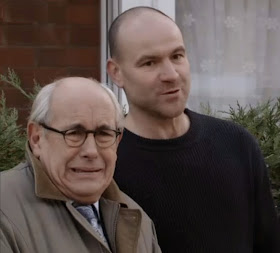 Brilliant! But despite Nozzer gurning his face off while Beth showed off her Madonna costume (Madge made her first ever UK performance at the Haçienda in 1984, fact fans), it’s safe to assume the Kabin Killjoy would have given the Haçienda a wide berth during its 80s heyday.

Tim, on the other hand, was no doubt a regular. You didn’t need to read to have a good time at Manchester’s famous nightclub – top, sorted, MAD FER IT.

The Haçienda opened in 1982 and was a joint venture between Factory Records and New Order. It was financed mainly by New Order record sales. Legendary acts such as The Stone Roses, The Smiths, Grandmaster Flash, Run DMC, Happy Mondays and Oasis all played there – as well as New Order, obviously. 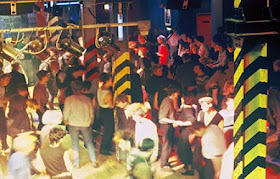 The Haçienda provided an early UK platform for acid house and gave rise to the whole “Madchester” scene. It also laid the foundations for rave culture and today’s electronic dance music.

While it changed modern music, the Haçienda famously ran at a loss. New Order bassist, Peter Hook, has claimed the club lost up to £18 million in its final years. When gangs and drugs took over by the 1990s, the dream had turned sour. The Haçienda closed in 1997 and was demolished in 2002.

I never got to the Haçienda. I was 15 when it shut its doors (the same age as the club itself), so there wasn’t much I could’ve done about that. But this quirk of history does upset me – especially as it’s something my older sister has over me. She went to Manchester Uni during the peak of Britpop (94-98) and managed to frequent the Haçienda before it croaked its last. 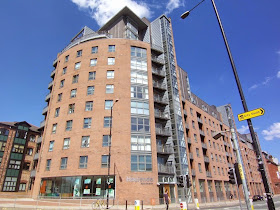 The site was converted into flats, of course – “The Haçienda Apartments” now stand at 11-15 Whitworth Street West; the coolest address in Manchester and one I often visit in homage to what was an iconic cultural landmark that had a lasting impact on millions of people far beyond the boundaries of Manchester.

I often wonder which Corrie characters would have spent their weekends raving it up at the Haçienda. While it’s difficult to be certain (as I’ve said – I wasn’t there), here are my Top 10 most likely Weatherfield contenders to have had Fac 51 membership:

Peter would have been 17 when the Haçienda opened and already in the navy. But if Ken ever invited his son to Weatherfield while he was on shore leave (unlikely, I know), a trip to the Haçienda would have been a must for this hedonistic sailor – especially if this T-shirt is anything to go by: 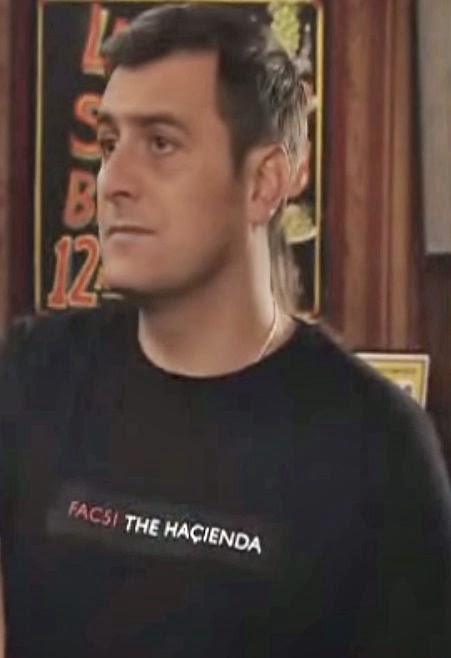 Liam was a proper TopBoy with swagger and effortless Manc charm. Remember when he installed a jukebox in his gaff and had to decide which tunes to have on it? New Order made the cut. I also recall Liam in the Rovers naming “Fools Good” by The Stone Roses as his favourite song. A definite Haçienda man – era: the mid 90s.

A couple of years younger than Liam, they would have moved in similar circles given the relationship between Carla and Liam’s older brother, Paul. In planning his doomed marriage to Tracy Barlow, Rob proved himself a fan of Oasis, The Roses and The Prodigy (for all your rave/techno needs). He would have turned 18 two years before the Haçienda closed and so could have sneaked in just in the nick of time (and before his time in the nick). 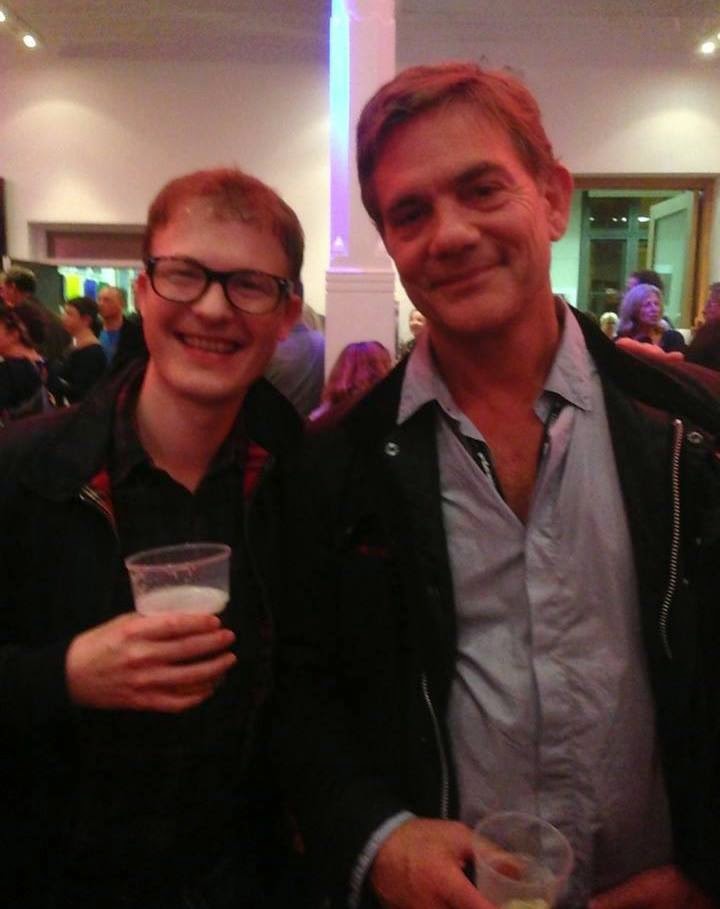 Talking of firestarters, Karl would almost certainly have been found burning down the house at Hac 51. He was rarely seen wearing anything but Pretty Green (Liam Gallagher’s label) during his time on The Street. I met John Michie at Labour Party Conference (2013) just as his final scenes were about to air. I asked about the Pretty Green clothes. I was impressed when he told me this was something he added to the character – because even though he didn’t have much money, Karl was the kind of bloke who would have spent what he did have on clothes (amongst other vices). Karl would have been 19 when the Haçienda launched. My verdict is that he was there from opening night onwards.

I quite like Tracy at the moment. I warmed to her when she walked down the aisle to “Waterfall”. And when it all went tits up, she sat and listened to The Stone Roses on repeat for a week. She’s got taste. And she didn’t think much of the 80s tunes that Beth chose for her wedding day. My view – Haçienda goer: late doors.

Though her wedding playlist veered towards the cheesier end of the 80s spectrum, I reckon the misspent youth that Beth sometimes alludes to would have involved some mad ones at the Haçienda. Perhaps this is why she gets on so well with Tracy. Beth’s likely Hac heyday – early to mid 90s.

His banter with Nozzer is all the proof we need. And that line on Friday night is another reason why Tim is brilliant – and a nice touch by the writers. 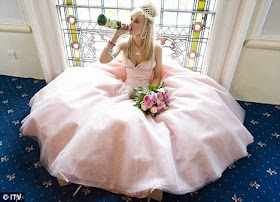 I don’t have much to base this on, except for the fact that Becky was no stranger to a big night out. Technically she would have been underage when the Haçienda closed. But I don’t think that would have stopped her.

A teenage tearaway when he first arrived in Weatherfield, Steve was always getting into mischief in his younger days. I find it hard to believe that Steve and Andy never went up town for a night at the Haçienda. I just hope that poor Steve can experience the good times again.

Age wise, this makes sense. Born in 1958, Owen was almost certainly still going for it in the early 80s before settling down and finally getting out of the game with the birth of Izzy in 1986. Recently, Owen could be heard singing along in the kitchen to “There She Goes” by The Las, so he's into his music. I reckon Owen went once or twice in the early days.

And that’s my 10. It was a narrow miss for Lloyd Mullaney. Lloyd is more into Northern Soul but as a lover of music and all round cool guy, it's probable he would have made the short journey from Liverpool to Manchester to see what was going on. 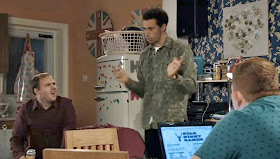 I would like to give an honorary mention to Luke Britton. Luke was probably still in nappies when the Haçienda closed. But it’s clear from Kirk’s stag do that Manc vibes run through Luke’s veins. It was funny watching him try to get the party started in Tyrone’s front room – “This is quality mate, just wait for the drop” said Luke as he enjoyed his one-man rave while Craig googled Stag Party Games. It was a genuine case of M.V.I.T.A. (Manchester Vibes In The Area).

Anyway, that’s it from me. My train is pulling into Manchester Piccadilly and I’m in the mood for a party. I’d better find myself a double espresso and get down The Haçienda Apartments. Top Buzz mate.

All original work on the Coronation Street Blog is covered by a Creative Commons License
Martin Leay at 10:00
Share